Visiting Niagara on the Lake

Niagara on the Lake offers tourists an in-depth view of a pristine little community rich with history, brimming with entertainment, and filled with adventure. If it is theatre that interests you, look no further. If wine strikes your fancy, wine festivals abound, and if history intrigues you, then you should be visiting Niagara on the Lake - an ideal vacationing destination! 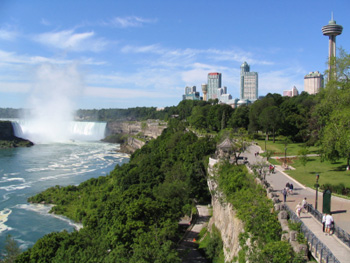 A little bit of history

Niagara on the lake was founded by loyalists who fled the American Revolution in order to retain their roots to the British. The quaint town was to be renamed a number of times. Originally known as Onghiana, its name was changed to Butlerburg by the British settlers in 1781. Later it was called West Niagara, and then Niagara in 1798. Niagara on the Lake would only be adopted in 1880.

The picturesque little village was at one time a constant battlefield. In 1812, the Americans invaded, captured and destroyed the town. Niagara on the Lake holds such historical gems as Fort George, Navy Hall, Butlers Barracks, perfect examples of early historic preservation. The town holds the prestigious title of producing Ontario’s 1st newspaper and 1st library. It also boasts the story of Laura Secord, and prides itself as being a key to the under-ground railroad, which helped liberate countless African-American slaves.

Visiting Niagara on the lake gives one the opportunity to indulge in three stunning theatres: the Festival, the Royal George, and the Court House. This community is home to the renowned Shaw festival which pays homage to the late George Bernard Shaw. It offers a wide variety of theatrical performances that draw fans of the art from everywhere. In between plays, you can stroll through numerous gardens, art galleries and antique shops that are all part of Niagara on the lake.

Some of Canada’s finest wineries are found in this part of the country. There are festivals year round. Niagara on the lake produces the world’s largest volume of ice wine and, some would argue, its best. The Wine Festival in August holds over one hundred events, which includes tours, wine tasting and concerts. There is also the world-renowned Ice Wine Festival which is held every January and is by far Ontario’s most popular wine event. To top it all, Niagara’s New Vintage Festival showcases the year’s new releases and gives wine aficionados and tourists alike a sneak sampling of the upcoming year’s new wines. Visiting Niagara on the Lake is a palatable experience.