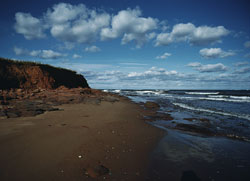 PEI is often called the Birthplace of Canada because it is where delegates from Upper and Lower Canada (now Ontario and Quebec) gathered to discuss Federation. However, you may better know PEI as the home of Anne of Green Gables. If you are an Anne fan, you won’t want to miss a visit to Green Gables and Cavendish, the home of Lucy Maude Montgomery. You can see the red beaches and many of the locations mentioned in the book such as the “Haunted Wood” and the ‘Babbling Brook’.

The number one food produced in PEI is the potato and nothing accompanies the famous Lobster suppers better than potato salad. And, if you want the real classic Lobster meal you must experience The New Glasgow Lobster Supper which has been serving it up for over fifty five years.

See the official website of the province of Prince Edward Island.