Like its neighbor Quebec, Ontario is one of the largest provinces in the country and offers visitors an array of possibilities from five-star hotels in the cosmopolitan city of Toronto to peaceful lake side cottages in the rural areas. While in Toronto, check out tourist attractions such as the CN Tower which was recently nominated as one of the seven wonders of the modern world and boasts more than 2 million visitors a year! Take a stroll along the Waterfront and visit Ontario Place which offers exciting rides for the young and old. Visit the Toronto Zoo, home to more than 5000 animals. Southern Ontario (Canada’s fruit belt) makes many of the finest wines in the country. Take a wine tasting tour through one of the numerous vineyards in the Niagara region. While in the area, don’t forget to check out spectacular Niagara Falls, one of the world’s most requested honeymoon spots. 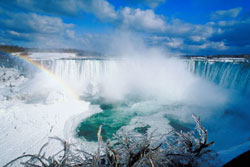 Ottawa, Canada’s Capital City, is also a lovely city to visit. In the winter, bring your skates and have fun skating down the Rideau Canal, the longest outdoor skating rink in the country. You can also visit the Parliament buildings and some of the best museums in the country including the National Museum of Science and Technology and the Museum of Civilization (located in nearby Hull).

See the official website of the province of Ontario.