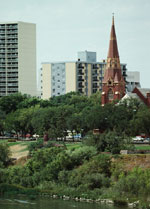 Saskatchewan, one of the Prairie Provinces, is also one of the farming provinces. Regina its capital is home to the RCMP (Royal Canadian Mounted Police, yes, those guys on horseback!). The city offers many fine restaurants, museums, and shopping. While there, you may want to visit the Royal Saskatchewan Museum, The Saskatchewan Science Center or the IMAX theatre with its five story screen. Most of Canada’s grain supply comes from Saskatchewan and the province produces many of Canada’s comfort foods, delicious breads and pastas. Don’t miss out on tasting the famous Saskatoon berry!

See the official website of the province of Saskatchewan.