If you are in the mood for a little European flavor, Quebec is the place to visit. Quebec City has an interesting historical background and you will appreciate the many narrow cobblestone streets and various houses dating from the eighteenth and nineteenth century. The Quebec City Winter Carnival is well worth the trip but make reservations well is advance and dress warmly! Dining in Quebec is an experience you don’t want to miss. Some Quebecois specialties include traditional tourtière (meat pie) and of course tarte au sirop d’érable. Eighty percent of the world’s supply of maple syrup is produced in Quebec. 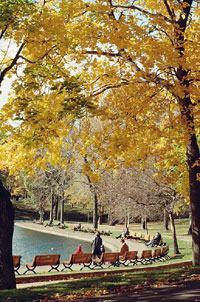 If you visit in the Spring when the maple tree sap starts to flow, give yourself a treat and head off to one of the maple syrup farms for a Sugaring-Off party, but go when you are hungry and expect to leave very sated indeed. Duck foie gras and Quebec lamb are also delicious. If you are in the mood for a little cheese with your wine, sample one of Quebec’s various cheeses (over 80 different kinds of cheeses!).

You may also want to visit Montreal and eat in one of the hundreds of world class restaurants. During the summer months, Montreal is an exciting city with one festival following another: The Montreal International Jazz Festival (which runs in the first week of July) and The Just for Laughs Festival. If you are in the mood for something a little less structured, head over to Mount Royal on a Sunday afternoon and enjoy what is called ‘TamTam’, a spontaneous gathering of drummers who meet to jam as soon as the snow melts until the snow falls again.

See the official website of the province of Quebec.