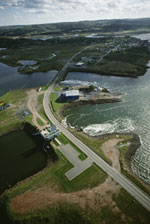 Nova Scotia is a farming and fishing community. You are never more than 30 minutes from the ocean so fresh seafood is delicious. The scallops from Nova Scotia are world famous and the lobster and mussels are unsurpassable. And don’t miss out on Nova Scotia’s signature dish – seafood chowder.

Some of the first settlers in Nova Scotia were the Scots and the Scottish tradition is still going strong with its flavor evident in music, dance, fiddle playing and food, from Scotch pie to Scottish oatcakes. Speaking of Scotland, you may want to have a wee dram and visit North America’s only single malt whiskey distillery. Halifax is a lovely city with a small town feel and many friendly locals. Check out the beaches, museums, galleries and historic sites. Visit the lighthouses dotted along the shore. Take a hike along the famous Cabot trail and enjoy the seaside cliffs and panoramic views.

See the official website of the province of Nova Scotia.