When ski season arrives in November, thousands of Canadians grab their skis and poles and head for the hills. Skiing is a beloved sport in the wintery northern nation, where scenic, rolling mountains and lengthy, groomed trails are plentiful.

Perhaps the most exciting part about skiing in Canada is that the nation is home to a number of prominent, world-class ski resorts. Many of these facilities offer complete accommodations, eateries, ski instructions and equipment rentals, as well as slopes to suit all levels of experience - perfect for beginners, seasoned pros and all stages in between. Families looking for a fun and healthy way to enjoy the great outdoors particularly benefit from this seasonal sport, which typically runs from November to April. 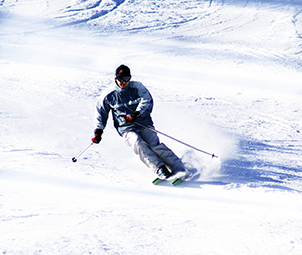 Whether skiing is performed as a competitive sport or recreational activity, the fundamentals are the same: you strap on a set of skis to the bottom of your boots and travel on the surface of the snow, usually with the help of handheld poles for propulsion and balance. There are two basic forms of skiing:

The Canadian winter climate is known to be rather chilly. Skiers should wear thermal undergarments, multiple layers of warm clothing and an outer wind-resistant shell to insulate them against the cold. They will also need to be outfitted with:

To prevent random accidents, certain safety guidelines should always be observed when skiing. Here are a few important rules for skiers to follow:

The quality of skiing in Canada rates among the world's finest. Every year, millions of enthusiasts visit the country just for the thrill of conquering its most acclaimed slopes. Canadian ski resorts are naturally breathtaking, with state-of-the-art facilities, well-maintained grounds and easy-to-access entry points. Some of the higher-end resorts like Whistler and Mont Tremblant provide not only an outstanding level of skiing for its guests, but also several other good reasons to visit the area throughout the entire year. These features include relaxation spas, fine dining restaurants, luxury hotels, exclusive shopping boutiques, and spectacular hiking trails.

Geographically speaking, most of the skiing takes place in the western and eastern regions of Canada. For instance, out west means primarily in the provinces of British Columbia and Alberta, while in the east mainly refers to Quebec. The provinces in-between and in the Maritimes do have a few ski resorts but the hills are relatively smaller and therefore less challenging.