Throughout the country, on homemade backyard rinks and frozen ponds, and in community centres and professional arenas, the young and old can be seen playing the game of hockey. Canada's long-standing love affair with the sport reveals its importance as not only a cultural recreational activity, but an identifiable national trademark as well. Hockey's popularity and influence has even impacted on the mainstream consumer market. Take for instance, a leading coffee and donut chain spearheaded by an early ice hero: Tim Horton. 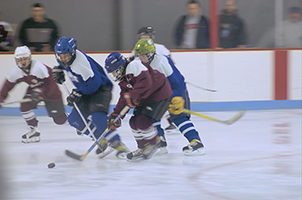 A Game for Anyone

In Canada, hockey is a symbol synonymous with the maple leaf, which often decorates player jerseys, from bush leagues to the big time. But the real beauty of the game is that anyone can participate. Regardless of age or skill level, what has been coined "the fastest game on ice" is not only fun, but also a good way to get some fresh air and a great way to exercise the body. The essential requirements are a pair of skates, a stick, a puck and a sheet of ice (although a little balance and a tolerance for the cold comes in handy too). The principle of the game is simple enough: move the puck down the ice and score on the opposing team's net.

Hockey does come with a certain amount of risk for personal injury. A layer of prevention before getting on the ice is the key to safety. Using the right type of equipment can effectively offer a player some protection against harm (particularly during league play when things can get a bit rough). Standard safeguarding hockey gear includes the following:

Because goaltenders are responsible for blocking goals with their body, they require more than just the customary hockey accessories to shield themselves against injury. Their armor usually includes:

Frozen lakes and ponds make great hockey rinks for amateur play. However, such locations require additional safety precautions. Before taking to the ice, players should:

Playing in the Big League

"Hockey Night in Canada" is not just the airing of a game but a significant event across the country. Each year during the traditional NHL (National Hockey League) season, legions of obsessed fans flock to their televisions or the nearest sports bar to watch the puck drop on their favorite players. They will root for their leading team and watch excitedly as the drama unfolds. Emotions build as the action on the ice intensifies when teams vie for the coveted Stanley Cup during the end-of-season playoffs. Consequently, professional hockey in Canada has become as much about the fans as the sport itself.

Besides following the national league, the country takes pride in its international hockey team. For years, Team Canada has remained a force to be reckoned with on the global ice rink, having won the Summit Series in 1972, four of the five Canada Cup competitions held between 1976 and 1991, an unmatched eight Winter Olympic gold medals, four consecutive IIHF World Championship titles and the World Cup of Hockey in 2004.