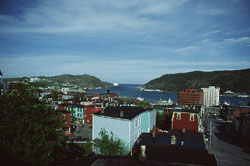 Newfoundland is a friendly place with a harsh but beautiful landscape. The cuisine here was born of necessity due to the fact that during the bitter winter months, very little resources were available. As a result, one of the specialties of the place is cod tongue, born of the days when every single part of the fish was eaten. Be warned that when you ask for fish in Newfoundland you will always get cod! Cod is so common that it is often just referred to as ‘fish’. Any other type of fish is called by its name. While in Newfoundland, visit Cape Spear where Newfoundland’s oldest lighthouse still stands after sixteen decades. Take a walk on Water Street in St. John’s, the oldest street in North America. Experience the vast wilderness of nearby Labrador –over 300, 000 square kilometers of unspoiled land with some of the best fishing grounds in Canada.